Viral immunologist Dr. Kizzmekia “Kizzy” Corbett helped lead the National Institutes of Health team that developed Moderna’s coronavirus vaccine. Friday, she was there as the Rev. Jesse Jackson was vaccinated, part of an effort to combat Black community distrust. 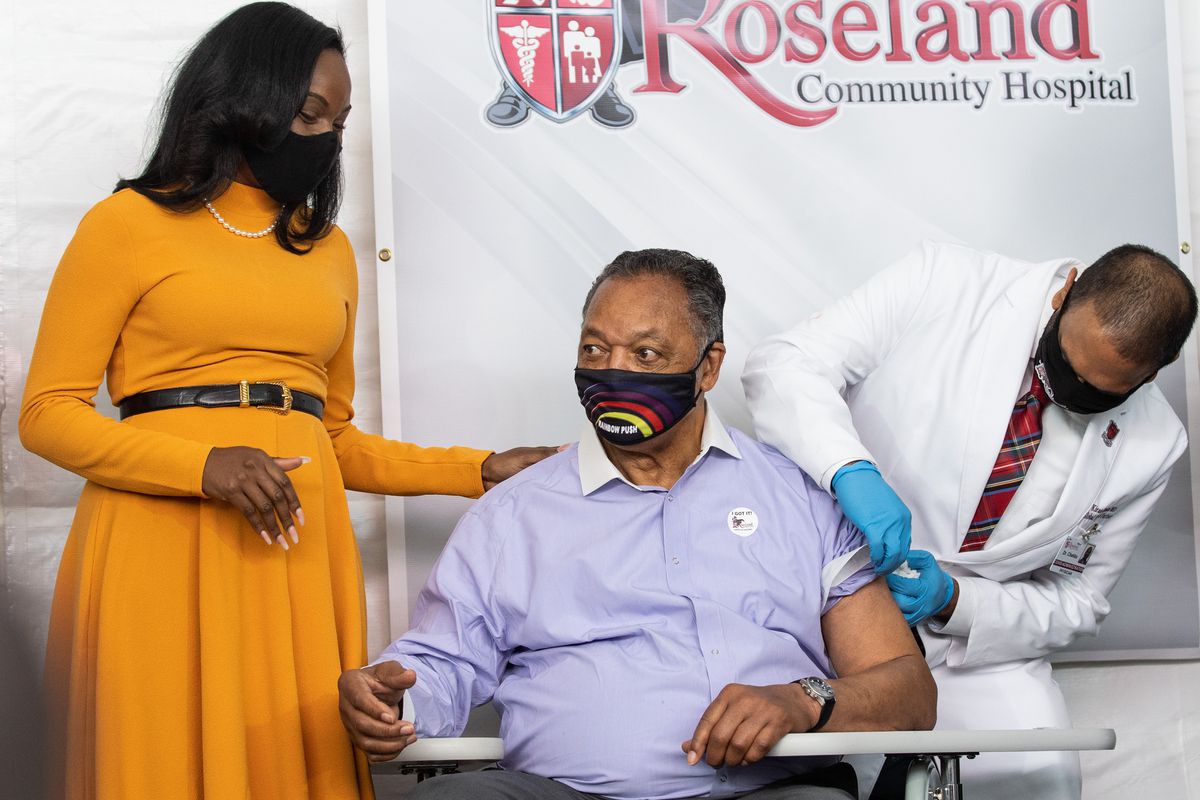 In the monumental effort to build Black community trust of the coronavirus vaccine, the Rev. Jesse Jackson rolled up his sleeve. Famous viral immunologist Dr. Kizzmekia “Kizzy” Corbett placed a supportive hand on his shoulder. And Dr. Kiran Chekka stuck the needle in his arm.

Jackson, founder and president of the Rainbow PUSH Coalition, was on his way to being protected against COVID-19. In a month, he’ll return for the second dose, ensuring full vaccination.

A simple act. A huge deal. The 79-year-old civil rights leader and Corbett, the Black woman scientist who co-led the National Institutes of Health team that developed the Moderna vaccine, made for a powerhouse duo of role models.

“We know our history, and we understand from where this hesitancy comes,” Corbett, 34, a rock star in immunology science, told the Chicago Sun-Times afterward.

“Those two things do not go together. And so it’s really time for action from scientists, physicians, etc., to really extend ourselves to reassuring those communities, so we can get the ball rolling. A lot of times, people just need to see their mirror image.”

Presenting mirror images has been a focus of Black community leaders since rollout of the first approved vaccine — by Pfizer-BioNTech — as the national effort to reach herd immunity by immunizing 75% of the population brings a reckoning with racism in health care.

Just days before the vaccine rollout, Jackson joined Illinois political leaders and city and state health officials at a roundtable where public vaccinations of Black leaders was deemed imperative in persuading the Black community to participate in the largest vaccination campaign in U.S. history.

Hesitant Black elders point to the Tuskegee experiment. The younger generation grew up in health care deserts, and is acutely aware they receive lower quality health care than whites.

“One of the things Rev. Jackson has done for decades is lead the community by example,” said Corbett. “It is so important in times like this that pillars of the community stand up in that way and say, ‘Look, this is important for our community, for our health, and in order to show you I really believe in this, I’m going to do it myself.’ ”

The high profile awareness effort came as the virus killed an additional 126 Illinois residents on Friday, with 9,277 more infected. Illinois now has the sixth highest COVID-19 deaths by state — more than 19,108 dead over the past 10 months, over a million infected.

Statewide, only some 213,000 residents have been vaccinated, with surveys showing Blacks still wary of such government projects. Nearly 40% of Black respondents in a Kaiser Family Foundation survey had no interest in being vaccinated.

Meanwhile, Blacks are hardest hit by coronavirus deaths, dying at twice the rate of whites.

Corbett became interested in science in high school, attended the University of Maryland Baltimore County, then interned at the NIH at age 19.

She received her Ph.D. in microbiology and immunology at the University of North Carolina before joining NIH’s Vaccine Research Center as a postdoctoral fellow in 2014.

“I didn’t wake up with this mission. I’ve been in vaccine development since I was 18 years old, as nerdy as it is to say,” Corbett said Friday, reflecting on how she, along with her boss, Dr. Barney Graham, led what has been called one of the greatest scientific feats of the 21st century.

“There have been centuries of medical injustice on communities of Black and Brown communities that no one can deny. It is now time for us to, No. 1, own up to and apologize for it, and, No. 2, provide an end for those communities to receive equitable health care and vaccine like we are trying to do today,” Corbett said.

“The only thing that we can do is to become more trustworthy. I am here today to serve as a liaison to what is real behind the vaccine, and to the science of the data. Many times, there has not been anyone like myself who has been able to break down scientific information, out in the community like this,” she added.

“I would say to our community: I understand, and I empathize with their hesitancy and with the distrust and mistrust, based on the history,” she said. “And so I’m here out of empathy, out of care, out of my onus to start to lay some of those bricks. We’re not going to get over that hump of hesitancy with this one incident, but hopefully as time progresses, we can start to rebuild some of that trust.”

Teachers Union Blasts Mayor, CPS Chief For Threatening To Discipline, Dock Pay Of Those Who Don’t Report To School

Confusion ensues as Cook County changes course on its online COVID-19 vaccination form, filled out by 40,000 people so far

ABOUT US
News and Information around the Southside of Chicago and South Surburbs
Contact us: admin@cookcountysouth.com
FOLLOW US
© Newspaper WordPress Theme by TagDiv

Please log in again. The login page will open in a new tab. After logging in you can close it and return to this page.

Join the Cook County South mailing list of more than 30,000 subscribers on the Southside and suburbs to stay up-to-date with the latest news and information.